Finding the dignitaries is not easy. At least not in those early days of Covenant.  The minister traveled on the train from Washington, and he was to meet three Elders of Covenant at the railroad station in Oakland. There was just one catch – they had never met before and the station was crowded. The Elders cornered every man who looked like a dignified minister, but Pastor Churchill was not it. Pastor Churchill also had difficulties. He spoke to all men looking like they might be Elders, but alas the station gradually emptied and no contact. Finally, the pastor went over and talked to three “kids” whom he had seen before and asked them how to get to Berkeley.  The “kids” told him the way and at the same time said they were from Berkeley, and were looking for a minister. From then on, things became clearer.

During the first ten years, the church rented space in two meeting halls and an empty store. The first meeting place was three flights up in a lodge hall.  Once a month, the lodge would hold a Saturday evening dinner.  This meant that “one Sunday a month the aroma of sauerkraut permeated the church services from the meal the night before.” (Rev. Churchill)

The second meeting place was in an upstairs hall at the Builders Exchange Building, 2024 University Ave. Rev. Churchill describes the facilities: “Madame Besant’s picture was on the wall, and séances were held Sunday afternoons before the Evening Service.” 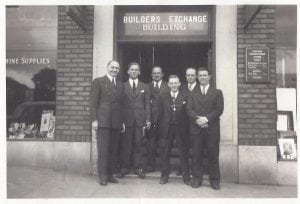 The church next moved to an empty store at 1615 University Avenue. 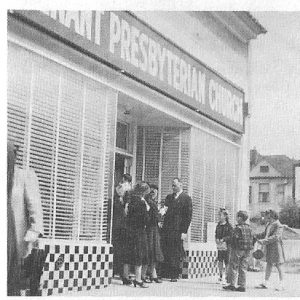 On March 4, 1946, the congregation purchased a Victorian house at 1623 University Avenue, its current location. 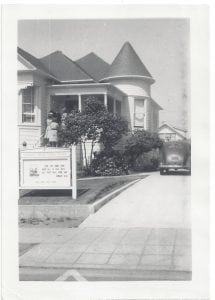 Some remodeling was done to make the space suitable for worship.  Rev. Churchill describes the scene:

We took out the central partition, but the building inspector said there had to be stringers – two 2 x 16s above the ceiling.  But it was war time. Gas rationing; and no trucks were allowed to haul less than a full load.  How then? You guessed it. Tied on top of the pastor’s car, from El Cerrito.  It was never the same (i.e., the car).

For six years, Rev. Churchill taught an off-campus course for University of California, Berkeley students titled “The Philosophy of the Christian Religion.” Dr. Robert D. Knudsen attended those classes and became a member of Covenant Presbyterian while he attended UC Berkeley. Dr. Knudsen would eventually succeed Dr. Cornelius Van Til as Professor of Apologetics at Westminster Seminary, Philadelphia.

As a result of Rev Churchill’s ministry, Dr. Harvie Conn began attending Covenant Presbyterian as a teenager. He became a member and attended the church throughout his student days at UC Berkeley,  Dr. Conn would become a missionary to Korea (1960-1972) and then Professor of Missions and Director of the Urban Missions Program at Westminster Seminary (1972-1998).

In November 1948, Rev. Churchill and his family moved to Cedar Grove, Wisconsin.

On March 25, 1949, Rev. Robert H. Graham, also one of the founding ministers of the OPC denomination, became our second pastor. 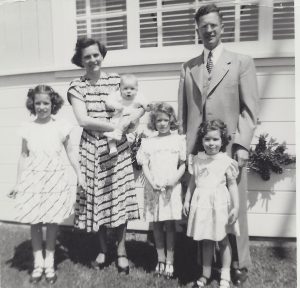 During this time, the congregation made major changes to the Victorian house it had purchased by demolishing the front half of the house and building a chapel in its place.  The new church building was dedicated on March 23, 1952. 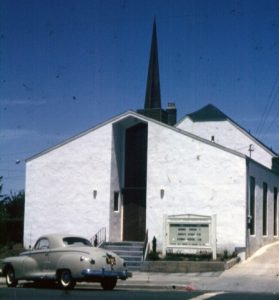 During Rev. Graham’s ministry, the church had an opportunity to broadcast its Sunday evening sermons over a local Christian radio station.  The broadcast began in November 1952 and continued until April 1953, during which time Rev. Graham preached a series of sermons on the Westminster Confession of Faith, and two other series of sermons “On Things Most Surely Believed” and “On What the Bible Says About Jesus.”

In March, 1955, Rev. Graham began a yearly lecture series entitled “The Westminster Lectures.”  According to Rev. Graham, “the lectures came as a challenge to the Earl Lectures at the Pacific School of Religion where Dr. Emil Brunner was the lecturer and promoter of neo-orthodoxy.”  Dr. Cornelius Van Til, Professor of Apologetics at Westminster Seminary in Philadelphia, was the lecturer at the first series.  The first lecture series was so popular, that the Westminster Lectures were held yearly in March until 1965.  Dr. Van Til would return as a lecturer in 1962.  Other lecturers from Westminster Seminary included Dr. Meredith Kline, Professor John Murray, and Dr. Edward J. Young.  Rev. Robert Churchill returned as a lecturer in 1960.

Listen to a recording of Dr. EJ Young speaking on Isaiah for the 8th Annual Westminster Lectures, March 1963.  The recording is of the second of three lectures.

In December, 1955, Rev. Graham and his family moved to Middletown, Pennsylvania.

In June 1956, Rev. Lewis began his ministry at Covenant Presbyterian. He was ordained and installed as our third pastor in May 1957. 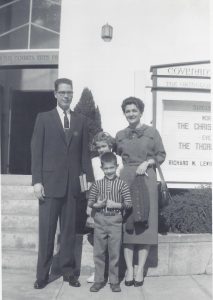 During Rev. Lewis’ pastorate, the church started two daughter churches.  Rev. Lewis and two families from Covenant Presbyterian began weekly Bible studies in Novato, California.  Eventually, the Session at Covenant invited Rev. Graham to carry on more extensive church planting work in Novato.  The Lord blessed this work and Trinity OPC was organized as a separate church in May, 1971 with Rev. Graham as its organizing pastor.

Rev. Lewis retired from the ministry in 2001.

On November 16, 2001, Rev. Forkner was ordained as the fourth pastor of Covenant Presbyterian. 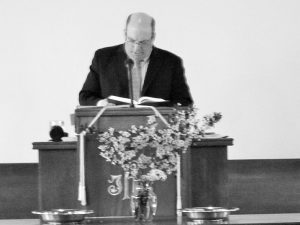 The church continues its ministry to students at UC Berkeley and communities around Berkeley.

We pray that the Lord will continue to use our congregation in His service until He comes again.  We are thankful for the many blessings the Lord has bestowed on us throughout our 81-year history.